Yeong Ran Suh is a choreographer, performing artist, and Artist researcher resides in Seoul and Copenhagen. Her research has focused on ancient beliefs, traditional dance, rituals, and modernization in Asia. She has been created interdisciplinary performances based on investigations, field works, and interviews.

The scattered voices of locals and their village shamanic rituals in Seoul were captured in ‘I confess my faith‘ (2012). ‘The god of the earth comes up imperfectly‘ (2013) unfolded the flexible form of traditional dance and music before the modernization. The sexuality of contemporary women and ‘goddesses’ in ancient mythology were juxtaposed in ‘The death of Vagina’ (2015). She participated in the ‘Floating Bottle Project‘ (2016~9) in collaboration with Natsuko Tezuka (Japan, Berlin) and Venuri Perera (Sri Lanka), comparing western modernization process and its lasting effects in each society.

By historical and anthropological research, she compares the fixed worldview of current society with the other cosmologies embodied in tradition. It enlarges our view and imagine different potentialities of thinking and living in the era of systemic failures. Her interest expanded to pre-modern communities with ecological knowledge and Animism and Post Humanism New Materialism. She is currently a member of the ‘Becoming species’ – climate activist performance collective in Copenhagen.

Yeong Ran Suh studied Fashion and choreography in Korea. And she got her master’s degree at the University of Copenhagen in 2019, subject to ‘Religious Roots of Europe.’ 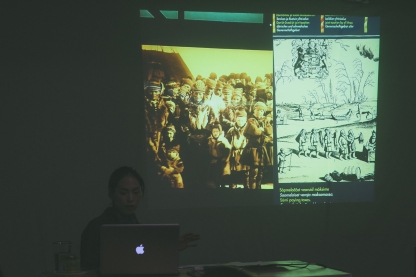