The God of Earth comes up Imperfectly

How were dance and singing embodied before they came on stage?

Dance and singing captured in the memories of those who experienced them during Korea’s modernization period carry the scent of wilderness. They did not have a fixed routine and spontaneously breathed and interacted together with the audience at all times.

‘Receiving god’, what we normally consider as superstition, was perceived as inextricable for the ability to dance fluently and to sing just as easily as one would talk. Do ancient form of dance and singing hold a key that leads us to a supernatural, transcendent state of mind?

This work started from a simple question acquiring a typical answer.

How did the Korean traditional music and dance looked like before being transferred to the stage of the theater? Therefore, I started to interview the people who did dance or sound during the modernization era. They were mostly shaman or Korean geisha. I could hear unreasonable wild type of dance and sound techniques from them. The old dance and music never been fixed as a convention and used a special presence of the place and improvisation. That enables the Performers and audience having a natural assimilation together. 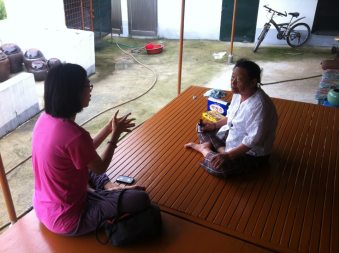 The improvisation, the one character of their wild technique “dance like Beolreong Beolreong(freely) and sing like talking” was strongly connected with the action of superstition or shamanism “receiving the spirit”. After the research on the ancient style of dance and sound, I could find the similarity between Korea and the other cultures. Many of them, their dance and sound were also oriented from receiving music from God. Does the ancient form of dance and sound have mysterious key leading the human to the other state of mental or different dimension?

This chasing is making some wild probability and presenting unexpected images by the dancer and Pansori singer. The song of old grandmother teacher is stored in our nerve network that cheering in front to the enchanting sound of Trot (similar with the Enka) and also stored in the sound of selling man in Namdaemun old market